The OPP BC Registry is always interested in learning about aspecial interest groups and individuals who support causes with very little substance to them, such as further ostercizing felons under the sophomoric assumption that it promotes public safety when empirical data clearly shows that it does not.

It has come to our attention that a Violent Offender Registry [VOR] is being considered by Ohio legislators, with Clifford Kime Hite [2417 Westmoor Road, Findlay, Ohio 45840] leading the vanguard. 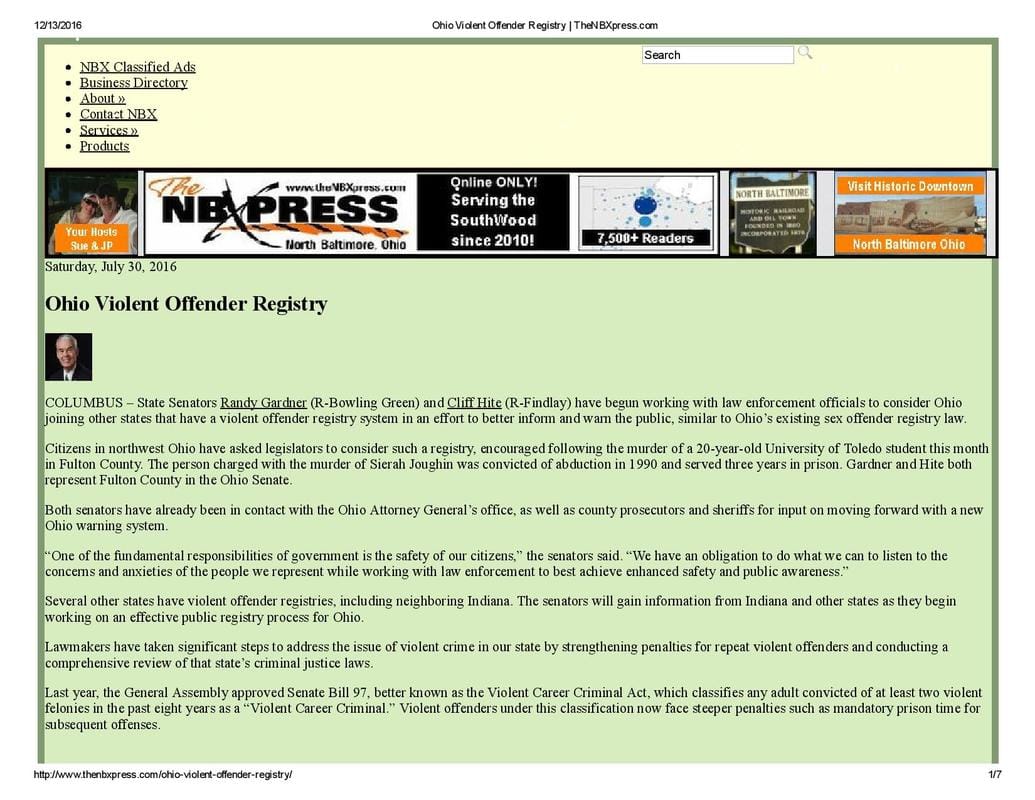 Paula D. Walters is currently spearheading the VOR under the umbrella of the Standing Courageous non-profit organization, exploiting the recent murder of Sierah Joughin by James Worley, who was previously charged with kidnapping and felonious assault of another woman, Ms. Robin Gardner, in the summer of 1990.  Apparently Worley's favorite attorney, Mark Powers, represented him during that case and a plea deal was struck where Mr. Worley was found guilty of abduction and sentenced to prison in November of 1990 to a term of 4-10 years only to be released in December of 1993.  Mr. Worley is currently awaiting trial for the death of Ms. Joughin.

​According to Ms. Walters, "I am a single woman who is new to the community I live in. I don't have friends or family that live near by either. I work long hours and have a busy schedule. It is calling for a lot of snow. I wanted to find someone to plow my driveway on days we have a lot of snow so that I may get into my driveway after a long night at work.  I went to the local hardware store to ask if they recommended anyone. They gave me a few names. It was at that time I would consult the sex and/or violent offender registry. You see, this morning the man I chose to hire to do that work sent me a text message asking when I work so that he may have my driveway done either before I leave or when I come home. Now, I have just let this man know when my house will be empty. Would I not want to know what kind of person I am hiring and trusting with that information? I assure you that if I find or found someone on either of those registries, I would not hire them. Many felonies do have a hard time finding work and they often do side jobs for extra money."

BUT, what happens when the person you are planning to hire isn't on such a proposed list because:  1.  He or she is/was a juvenile and are protected from disclosure?; 2. He or she was previously adjudicated and no longer involved in the criminal justice system when the proposed registry was enacted?; and, 3. He or she had their criminal charge diverted?

Ironically, Ms. Paula Walters (AKA Paula Gulch) had been charged with a violent crime only to have it diverted upon completion of a program to assist women who resort to violence.  How do WE know YOU wont attack us?  You won't be on the list.  We won't know your background (actually, we do), so how are we suppose to know?  Of course, Ms. Gulch claims that she was a victim of domestic violence which resulted in the charge against her while defending herself.  But, there are plenty of people in prison who also were victims of domestic violence who did not have their criminal charge diverted like Ms. Gulch did.  Where do we draw the line??  Even James Worley claimed that he was innocent of abducting Ms. Robin Gardner in 1990.

It's our understanding that Ms. Walters has been involved in several domestic situations resulting in some form of violence, using this platform as a method of personally addressing her failed domestic relationships. 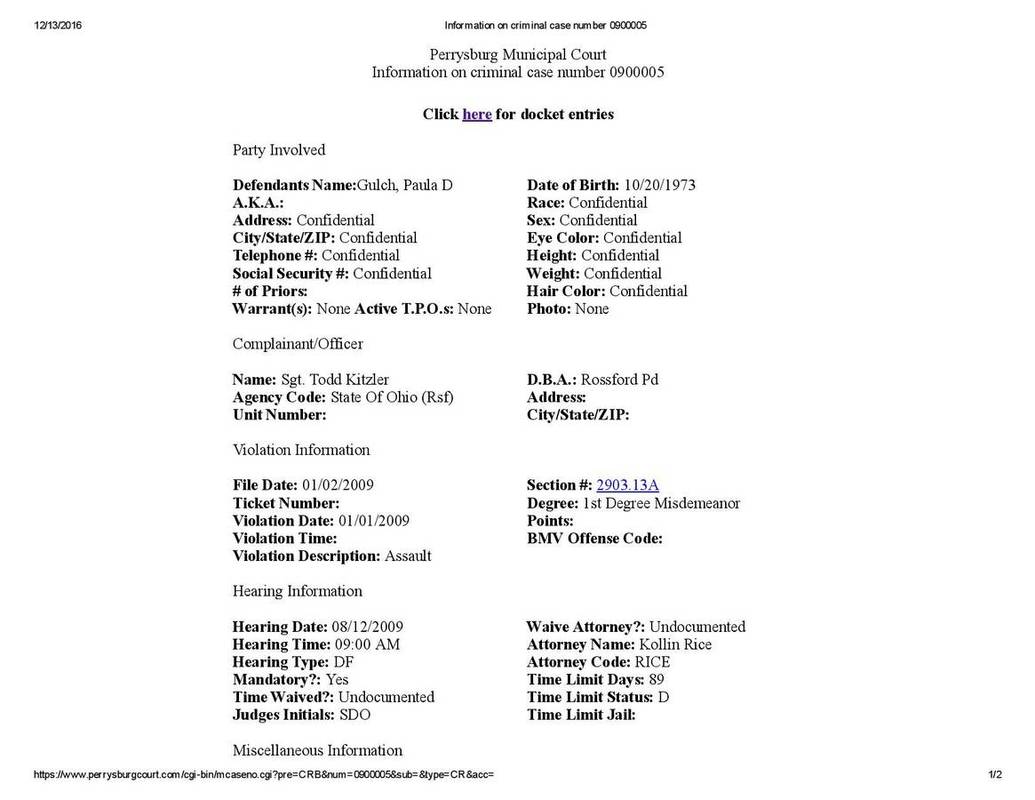 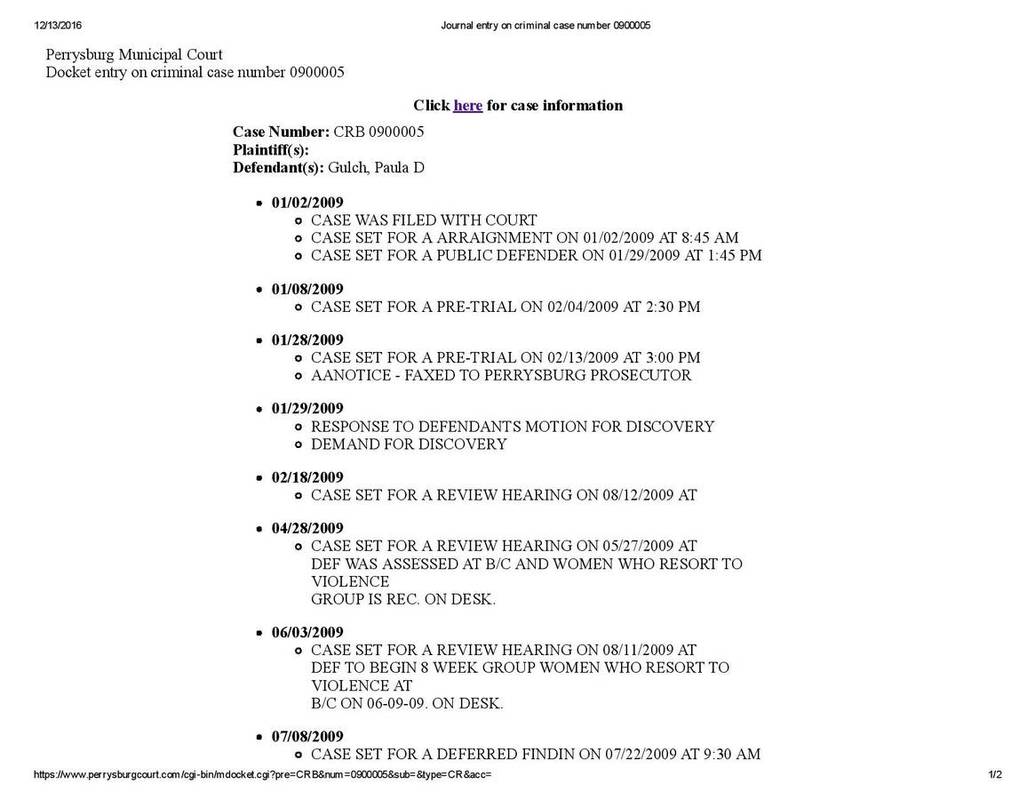 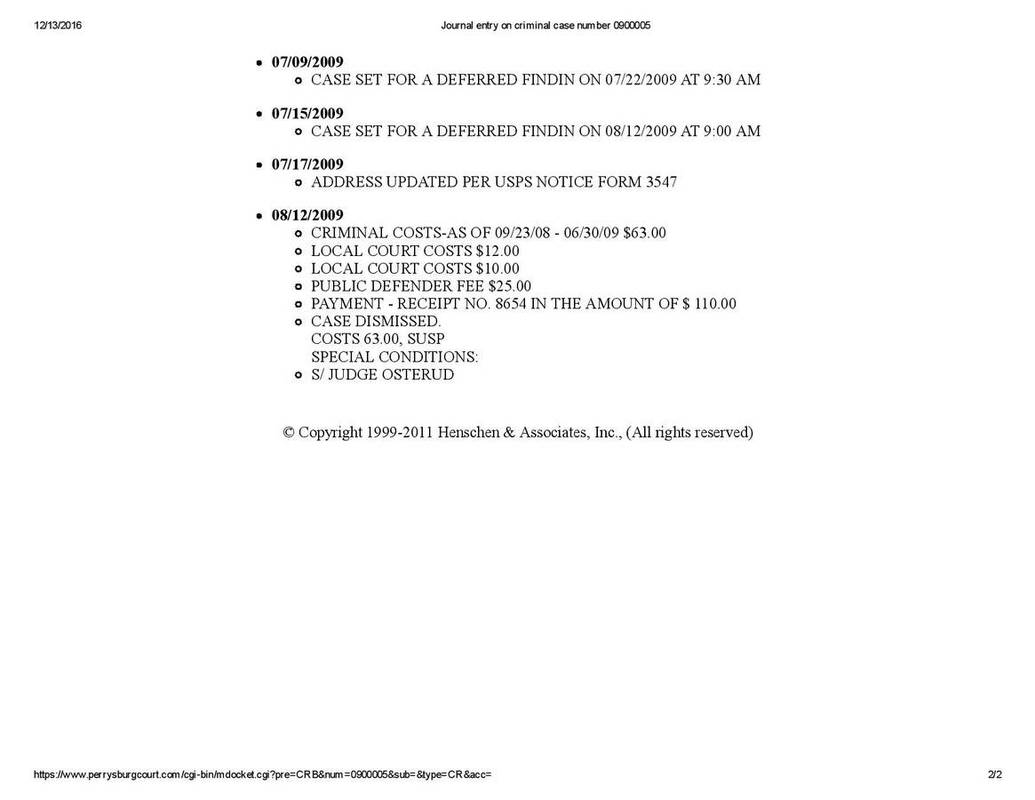 In 1931, the United States was gripped by the Great Depression. Mafia kingpins exerted a reign of terror over New York, Chicago, and other major centers in the Northeast. Los Angeles County district attorney Buron Fitts1 proposed an ordinance to keep organized crime out of the area. The idea, called “convict registration” or the “gangster law,” was to require anyone who had been convicted of certain crimes to register with the sheriff if they lived in the county or visited for more than five days.2 When the measure passed nearly simultaneously in the County and City of Los Angeles in 1933, it covered conviction for any felony as well as lesser drug or weapons charges.3 Many other municipalities in California and other states soon adopted similar laws.4

Do Criminal Registries Protect the Public?

1.  Prohibit plea deals when the accused is charged with a crime of violence.  2.  Extend the period of parole/probation for offenders convicted of violent offenses.  3.  Specification of violence attached to crimes involving physical harm with mandatory imprisonment.

If James Worley was denied the opportunity to strike a plea deal, it could have altered the entire course of events leading up to Ms. Joughin's death.

But prosecutors, judges, and defenses attorneys push for plea deals (90% of all criminal convictions are the result of negotiated pleas) which allowed Mr. Worley to plea out to abduction and again victimize another person resulting in their death.

It's important to contact all legislators to oppose the creation of a violent offender registry.  While we are contacting all Ohio legislators and other law enforcement agencies, we ask that you contact the following individuals/committees and take a stand against a measure that will only make certain people feel happy while we the tax payers foot the bill in more ways than one: